Early on in my marketing career, right about college, I discovered advertising and marketing giants that literally influenced the way I thought about all creative communication until present day.  Whenever I think about a new project or marketing initiative, one of the first things that comes’ to mind is; “What would Bernbach, Ogilvy, or Burnett do?”  Let me tell you right now, that if you don’t know these names, it would do you a world of good to find out.

Before the Cluetrain Manifesto, before Seth Godin and Viral Marketing, and before Mike Moran and Do It Wrong Quickly, there where these three.  They shaped advertising in their day, and the days to follow, and set a standard that knowing it or not, if you’re a good marketer, you already set yourself to follow.

What these three did and how they did it, in a time when the modern age of US consumerism was evolving in response to a more sophisticated consumer, was to explore advertising, and in relation, marketing, and created a new philosophy that mixed art and science to come up with some of the most successful campaigns anyone had or has seen since.

Just to clarify, I’m talking about Bill Bernbach, David Ogilvy, and Leo Burnett.  Ad men par excellence.  Go ahead and click on the links so you can learn yourself a little something.

And what do these three men have to do with today’s internet/ digital media world?  Simply this, “What’s true today was true yesterday” or my favorite, “All that’s old is new again.” These guys just didn’t change the ad and marketing space, the created new and exciting ways to explore it.  Just reading up on some of their campaigns will seem like complete déjà vu. 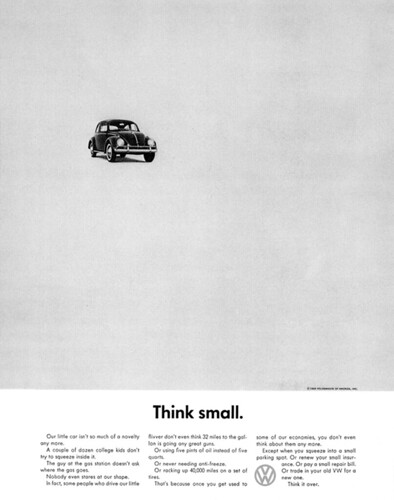 Bill Bernbach had an artistic and poetic bent the created a new way of thinking about advertising.  He was the mind that came up with the “Think Small” campaign for the Volkswagen Beetle, which is still recognized as the best advertising campaign of the 20th century. He just didn’t make some pretty pictures and some copy, he created concepts about the products he was trying to sell.  He made his campaigns exciting in a way that that very few had seen before.  He believed the good communication and good art would convey how good a product is.  He set out to prove that advertising and marketing was an art form, and those that did not treat it as such would fall by the wayside.    How many times have you seen bad marketing tank a product or service?

“Let us prove to the world that good taste, good art,  and good writing can be good selling.” 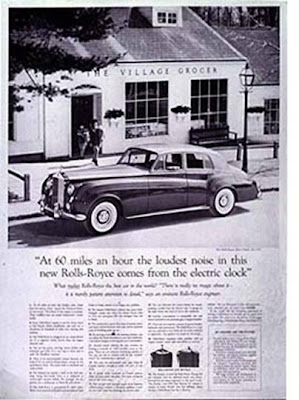 David Ogilvy was the quintessential advertising logician.  To hear him talk, you would think that creativity was a four letter word and should be burned out of the brain with acid.    He was into meticulous research and staying close to reality.  When he did a campaign, the first thing he did was learn everything, and I mean absolutely everything, he could about the product he was creating a campaign for.  When he created one of the best taglines for an automobile…ever, it was all research that led him to it.  “At 60 miles an hour the loudest noise in this new Rolls-Royce comes from the electric clock”  This after he spent hours combing through the actual car, driving it, sitting in it, and generally bugging the shit out of the engineers.  So, putting both the product and the consumer in his mind, he found that one detail which made the difference.  The Ogilvy Method was used to completely know the product and the products clients.

Leo Burnett was a branding animal.  There’s just no other way to say it.  He believed in creating an image around a product was recognizable and communicated the meaning of the product.  This is the man who created The Green Giant, Toucan Sam, Charlie the Tuna, and Tony the Tiger, just to name a few.  He concentrated on style and symbolism, creating what he called the “inherent drama” of a product.  Leo created a brand culture within his own company as well, using a big, black pencil throughout his career to symbolize the warmth and humanity of the people behind ideas.  Burnett was in all things very human and down to earth in his approach.  He believed in ideas, and the culture of ideas born from human imagination. And believed in having fun in what you create, and being bold and honest.

“Creative ideas flourish best in a shop which preserves some spirit of fun. Nobody is in business for fun, but that does not mean there cannot be fun in business.”

Three big names and three big ideas; the vision, the research and the brand are three of the most important concepts in any campaign.  If you’re not using these, then you’re not doing a good job at promoting your product.  It’s not just text links and traffic, but believability and communication.  In this internet age where we judge things by traffic, clicks and conversions, I often wonder what these three would have done.

Between you and me, I think they would have kicked our collective asses.

Yahoo Giants Of Advertising.  I suggest it highly.